The Corsair's distinctive sound, which earned it among the Japanese the nick-name of "Whistling Death", partly because of the engine sound, that was caused by the wing-root inlets for engine air. Shown above is Maj. Gregory Boyington's F4U from VMF-214.

If you’ve never seen a Corsair before, your first glance at the outsized propeller and "bent" wings might leave you with the feeling that either this warbird was assembled from parts that didn’t match or it has met with some sort of disaster. But from all these outsized and mismatched parts came one of WWII’s greatest fighter planes. It could outfight, outclimb and (if need be) outrun any prop driven enemy.

The US Navy Bureau of Aeronautics had a long tradition of issuing proposals for aircraft which pushed the limits of available technology. This stimulated the manufacturers ability to respond with new technology to meet the challenge. When "BuAer" sent its proposal for a high performance, carrier based fighter to United Aircraft Corporation (parent company of Vought-Sikorsky) on February 1, 1938, it seemed the Navy might have pushed technology to the point of giving it a hernia. C. J. McCarthy, who was Vought’s General Manager, called in the company’s chief engineer, Rex Beisel. Rex was one of those people who lived by the old motto "The difficult we do immediately. The impossible will take a week, ten days at the most." An elite team was selected for the development of Vought Design #V-166; Frank Albright as project engineer; Paul Baker as aerodynamics engineer; James Shoemaker as propulsion engineer. Each had an assistant. These engineers submitted their work to Beisel who then integrated it all into a final design.

Early on, Shoemaker chose the Pratt-Whitney R-1830 Wasp air-cooled radial engine because of it’s long history of reliability, and the V-166-A was designed around this engine. But, in 1940, the BuAer’s quest for speed resulted in a switch to the experimental XR-2800-4 version of the Pratt-Whitney Double Wasp, with a two-stage supercharger for the prototype XF4U-1 Corsair. The R-2800 engine was the most powerful engine in the world in 1940, exceeding 100 hp (74.6 kW) per cylinder for each of its 18 cylinders. The change in engines resulted in the design number being changed to Vought Design #V-166-B. The V-166-A was never built. With the awesome 2,804 cubic inch (46 liter) Double Wasp air-cooled radial engine developing 1,850 hp (1,380.6 kW), the only way to convert that kind of horsepower efficiently into thrust was with a huge Hamilton Standard Hydromatic, 3 blade prop which measured 13 feet 4 inches (4.06 meters) in diameter. And that created a problem of deck clearance for the prop. It seemed either the main landing gear had to be lengthened, or the prop had to be shortened.

Since the landing gear had to be very strong to withstand the pounding of a carrier deck landing, a short, stout leg was required. Also, there wouldn’t be enough room in the wing to properly stow a longer gear. And, if the prop were shortened, much of the horsepower of the Double Wasp would be wasted. So, Vought engineers came up with the distinctive inverted gull-wing design which forever characterized the F4U Corsair. This "bent wing" design allowed the huge prop to clear the deck while providing for a short, stout landing gear. And, as a byproduct, the wing also improved the aerodynamics of the intersection where the wing attaches to the fuselage, boosting the top speed.

It was a very "slick" looking plane using flush riveting and a new technique developed jointly by Vought and the Naval Aircraft Factory called "spot-welding". In order to make the Corsair as aerodynamically clean as possible, there was nothing protruding into the air stream. The intake for the turbo-supercharger, intercooler and the oil cooler were located in slots in the inboard leading edges of the wings. Vought designed the fuselage with a circular cross-section which fit snugly over the Pratt-Whitney engine. The F4U was the first Navy craft to have landing gear which retracted flush into the bottom of the wing, though it took some effort. Other craft had retracting gear, but there was always some bulge or part of the wheel exposed. Vought engineers designed the Corsairs wheels to swivel 90º and retract straight back to fit flat inside the bottom of the wing. Two panels then closed over the gear making a perfectly smooth fairing. The idea was to mate the most powerful engine with the smallest, cleanest possible airframe. 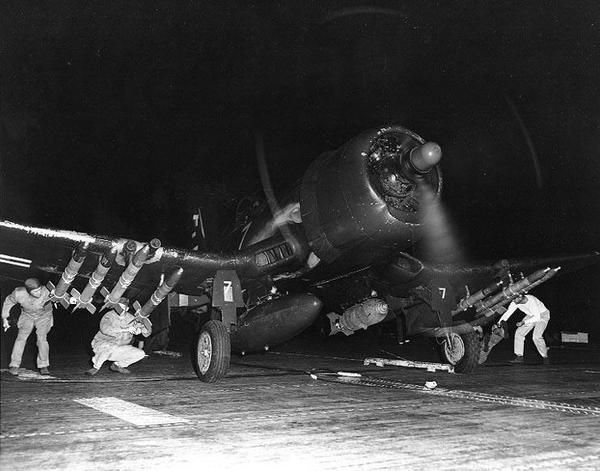 Several stumbling blocks developed when carrier trials were held aboard the USS Sangamon and other carriers in late 1941. The biggest problem was the long nose. It stuck out 14 feet (4.27 m) in front of the pilot, and when the Corsair was sitting in take-off position, the nose pointed up at an angle sufficient to block forward vision to about 12º above the horizon. In carrier landings it was practically impossible to see the Landing Signals Officer once the Corsair was lined up with the carrier deck on final approach. Adding to this problem were oil and hydraulic leaks from the engine compartment which seeped past the cowl flaps and smeared the windshield, further restricting visibility.

Landing on a carrier deck required the pilot to have the plane at stall speed just as the tail-hook snagged the deck wire, but this was made very difficult by the wicked stall characteristics of the F4U. Just as stall speed was reached, the left wing tended to drop like a rock. In a deck landing this could cause the landing gear to collapse resulting in injuries to the pilot and severe damage to the aircraft. Assuming luck was with the pilot and he landed intact, the Corsair normally "bottomed out" the shock absorbers as it slammed down on the deck. The resulting recoil caused the plane to bounce high in the air. The tailhook itself sometimes failed to "trap" the plane by engaging an arrestor wire. If this happened on a straight deck carrier it usually meant the aircraft plowed into the planes parked forward. It was said on a straight deck carrier there were only two kinds of landings; a "trap" and a catastrophe!

As the Corsair was thought by the Navy to be unsuitable for carrier duty, it was given to the U.S. Marines for land-based operations where it earned an outstanding combat record. Britain, France, New Zealand, Australia also received the F4U during WWII.